The results are in!

Home/Emergency Preparedness, First Aid, Gear/The results are in!
Previous Next

The results are in!

The great First Aid kit battle has been concluded and we are very grateful for your participation. For those of you who were unable to make it to the Banff Mountain Film and Book Festival this last weekend, I’ll summarize.

We had two kits laid out at our table. One, a commercially available kit and the other we assembled. We called them “the Blue one” and “the Red one.” So called because one was blue and the other red. We are creative types. It should be noted however that the red one has also been named “The Dave” after the illustrious and experienced Dave Watt. (And I don’t just mean old…he has a lot of medical experience too.)

We sought out the opinion of people visiting the booth and framed the question thus: “would you spend a little more money to get a kit with better quality, highly useful components.” And the resounding answer was yes. 81% of you chose “the Dave,” the kit curated by Dave’s years of wilderness medicine.

We received really useful feedback, which we will be incorporating into “the Dave” as we can, all the while keeping costs down. Common suggested additions were duct tape, (we Canadians feel really strongly about our duct tape needs) super-glue, and whiskey. One of these definitely won’t be included in the final kit!

We’d love some further feedback here. Consider the list above and leave us a comment with your suggested addition, not including meds. We recognize the value of meds but won’t include them in a kit due to provincial guidelines (with the exception of Aspirin.) Keep in mind the kit is designed for a small group (about 4) on a trip of less than about 4 nights.

One lucky winner has been selected to win a kit of their choice so congratulations to you! And for the rest of us, “the Dave” will shortly be available in its complete form for purchase. We will also be running some contests in the next few months on social media to win some of our all-time favourite first aid supplies, so find us on Facebook or Twitter! 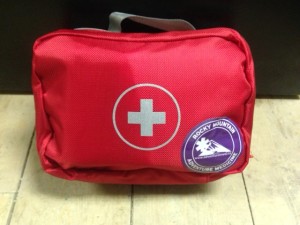 Gain the confidence you need to move your rafting, canoeing and kayaking skills to the next level. This course focuses on self-rescue skills so that you can look after yourself when out on the water and is great for those just entering the whitewater arena or for those who have already dipped a paddle and[...]
May
24
Sun
all-day Swiftwater Rescue 2 CANCELLED
Swiftwater Rescue 2 CANCELLED
May 24 all-day

Gain the confidence you need to move your rafting, canoeing and kayaking skills to the next level. This course focuses on self-rescue skills so that you can look after yourself when out on the water and is great for those just entering the whitewater arena or for those who have already dipped a paddle and[...]
May
25
Mon
all-day Adventure Medic – Days CANCELLED
Adventure Medic – Days CANCELLED
May 25 – May 29 all-day

The 5 day (40 hour) re-certification program is a great fit for those who are re-certifying for the first time or for those who prefer their learning to move at a less intense pace.  The program offers ample opportunities for discussion, review and practice of both theory and skills and ensures that learners leave with[...]
View Calendar
Toggle Sliding Bar Area