Blisters… A story of total failure.

Blisters… A story of total failure.

Lets start with me admitting that I have been super lucky. Blisters have never been an issue probably due to a combination of having been taught what to wear for socks and having the luxury of properly fitting shoes. The bottom line is I do a ton of hiking, have never really had to deal with this issue… until now. The last three times I have been out I have struggled with super narley blisters. Needless to say this has left me super frustrated while simultaneously challenging my blister treatment skills.

Just yesterday I was  part way up a short 10km hike with about 800m in elevation when I felt hot spots starting to form on both of my heels. This was the beginning of a saga that I would certainly rather forget.

Foot 1 = Hot Spot,  Attempted Treatment = Duct Tape
Foot 1 presented as a hot spot, no visible blister. At this stage duct tape can be applied smoothly over the skin to reduce friction and prevent the formation of a blister. Duct Tape can also be used if the blister has already started to develop (non-raised), but be sure to line the tape with a small piece of non-adherent gauze.

Foot 2 = Small Non-raised Blister, Attempted Treatment = Glacier Gel
Foot 2 had a blister already starting to form so I chose to try Glacier Gel. Glacier Gel is a waterproof, breathable adhesive gel that is highly cushioned and cooling. Simply prep the area with the supplied alcohol wipe and apply dressing.

Both Treatments failed miserably, balling up inside my boots, leaving raw broken patches of aggravated skin in their wake. In reflection there were a few things I could have done better: 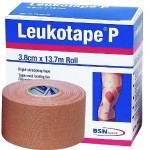 I was able to complete the hike but my feet were nasty and painful. This failure has led me to reconsider what I carry to deal with blisters. Currently: Duct Tape, Gauze, Antibiotic Ointment, Sterile Needle, Mole Skin, Glacier Gel. I have to say I am a little disappointed with Glacier Gel, having tried it twice, both times the bandage came off inside my boot before the end of the hike (despite its 4 day claim). It is officially out of my pack. I will be adding Leukotape, a better/stronger athletic tape that I can use in conjunction with moleskin or gauze, even in moist conditions. I will also be adding a sheet of Mepital. For information on its use see Alanna’s Post or watch the video below! 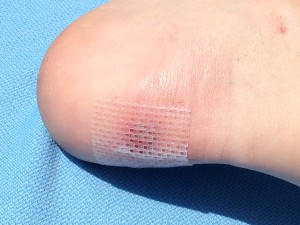 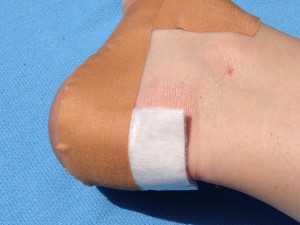 Gain the confidence you need to move your rafting, canoeing and kayaking skills to the next level. This course focuses on self-rescue skills so that you can look after yourself when out on the water and is great for those just entering the whitewater arena or for those who have already dipped a paddle and[...]
May
25
Mon
all-day Adventure Medic – Days CANCELLED
Adventure Medic – Days CANCELLED
May 25 – May 29 all-day

The 5 day (40 hour) re-certification program is a great fit for those who are re-certifying for the first time or for those who prefer their learning to move at a less intense pace.  The program offers ample opportunities for discussion, review and practice of both theory and skills and ensures that learners leave with[...]
all-day Adventure Medic – Weekends
Adventure Medic – Weekends
May 29 – Jun 7 all-day